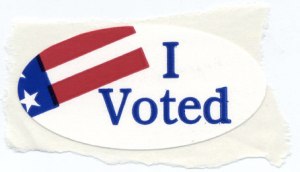 I generally avoid politics other than to say that you probably shouldn’t vote like me.  I am a priest who believes that if I do my job as pastor, teacher, and preacher, then the congregations I serve will draw sound conclusions and vote from a conscience that is formed and informed by more than my simple point of view.

People of good faith may be led to radically different conclusions at the ballot box.  This confounds politicos and citizens alike, but it is vital to healthy democracy.

A good Christian king could not feast while those in his care starved.  The victory gardens at the palaces of British nobles during the World Wars ought to stand in strong and disgusting contrast to our presidents’ vacations over the last thirteen years.  [And yes, that apostrophe is in the right place.]

We, of course, don’t have sovereigns.  We have citizens.  [We are ideally a Benedictine country, if you have been reading along.]  As citizens, we hold authority and responsibility like sovereigns of old.  Our primary place to practice those is in the ballot box.

So why is our citizenship so dumbed down that our presidents can call us “consumers” without an outcry?!  Because we often practice voting like idiots drug around by our media and public opinion disconnected from anything that could be considered value or virtue.  (Occasional outcries over the scandals of Instagram or freezers of money not withstanding, most of the media is playing our emotions not our values or virtues.)

Or worse, we becomes fans.  In the techisphere, fanboys are those people who love a product or product line because of the label on the back rather than the performance.  I am typing this on an Apple, by the way, while listening to my outdated iPhone.  Branding in politics may be breaking down, or at least we hope so.  But with the growth of money and advertising, we look more like people who know nothing being led by commercials rather than open debates about vital issues.

It is refreshing as an American to watch British parliamentary debates where the Prime Minister has to field questions from their colleagues on the floor rather than our president choosing who to answer from the press corps.  Genuine thought and responses, with wonderful hooting and name calling, but face to face and responsive.  (Swoon.)

So what is an American to do?

Two big missed opportunities are staring us in the face in this regard.  The Occupy Movement and the Tea Party both failed, and they have failed for a simple reason.  They had trouble stating clearly defined values and virtues, sticking to them and making them actionable.

I can’t write a book this week because I have other priorities that compete for my time.  Everything cannot be equal.  I have to define priorities and rank them and work on them one by one.  In a group this takes leadership.  In our nation it takes a genius that both movements missed.  There were too many priorities and too little leadership to define what was going to be the ONE thing to focus on.

A digital camera can focus on several things at once, but we can’t.  We have to take that model of ranking daily actions and apply it to our elections and local actions.

This isn’t sexy.  It’s adulthood.  It is hard, intelligent work.  It would be nice if the commentators on t.v. would help us, but we are going to have to take responsibility to think for ourselves.

Honestly, I want to tell you how to vote.  Of course, I do.  But as a pastor my value is a church of mature people living into God’s dream, and treating you like idiot fans is not going to get me there.   So my virtue becomes a focus on my job of forming disciples who know how to pray and worship, study and think, serve and love in the name of Christ.

It’s a matter of responsible authority.