Being a pastor sucks.  It is also wonderful in ways no other job is.  But there are days even years when the consolations of ministry are few and far between, and the critiques and mistakes form a flood that overwhelms the best of intentions. 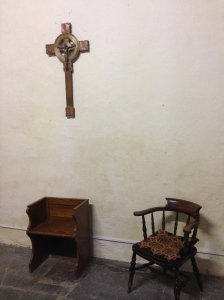 The Very Rev. Rebecca McClain asked me early on in mentoring me into the priesthood of the Episcopal Church what I thought it meant to be a priest.  My answer then is still one I am working out.  I said, “Being a priest means promising to be fully human, bearer of the  image of God and flesh and blood, broken and healed, in front of a group of people, no matter what.”  The vows of ordination are about the roles we play in the church.  But before all of the roles is this simple understanding that I hold about being a human being, a child of God in Christ, a Spirit-led person in front of a congregation.  To be honest about our humanity in its glories and failures sounds nice, but it is hard.  Rebecca and others have helped me to put flesh and blood to it, but it is often not supported and loved by the very people among whom we struggle to live it out.

I was realizing all of this in the middle of seminary.  I was in my seventh year of ministry by then, having worked in churches and a diocese prior to seminary.  By the seventh year most people leave ministry, and I was ready to join them.  My life was ugly at the time, mostly due to my own shortcomings and sins, and plenty of both.  I was an exile from every community that I could turn to.  I was out of touch with my family, my home community, my various churches.

I was sitting in the dark.  I was actually sitting in the dark of a small chapel at a youth retreat preparing a Youth Encounter team that would be welcoming and leading other youth through a weekend experience of Christ a month leader.  I was a spiritual director for the youth and young adult commission of the diocese, and I was there at the request of the director,  whom we will call Julie.  But I was struggling with leaving ministry altogether.

I was sitting on the side with another spiritual director watching Julie lead the eucharist for the youth.  I don’t remember the sermon.  I was in the tunnel vision of struggle and doubt wondering why I would stay.  I was asking God, What is there in ministry that I would die for? What could I possibly do as a priest that would matter enough for me to give my life to it? Suffering and self-centeredness are natural allies.

As the service turned toward the eucharist, the most intimate and holy space for us as followers of Christ, Julie called two teens up to be the table.  One was this boy with significant developmental issues that made him socially awkward and sometimes very difficult, he was lovable and frustrating at the same time.  The youth had earlier in the day reached the point of excommunicating him and even cruelly pushing him away when one senior girl, a gorgeous popular teen, reached out to him and used her popularity to pull him back into the group and build him up.

Julie had these two come forward and be the table by holding the elements of communion, the bread and the wine.  And Julie, with her wild red hair and her effusive enthusiasm, began to pray the eucharistic prayer from the prayer book from memory.  I was engaged and leaned forward beginning to feel like here in this moment God was answering my questions.

She lifted their hands!  They became more than sacred furniture.  She made them priests, the hands of Christ, bringing their full and broken humanity into the divine act of God in Christ.  It was holy.  It was priesthood.

Now I don’t know if one person there saw what I saw.  But I just began to sob there in the darkness.  I might have said, “Amen.”  But I know I said, “I will die for that.”

So I stayed, and I stay to lift up other people’s hands.  I am still pretty broken as a human being.  Mississippi pastors say we are all dirt and divinity.  I can’t say that I have Julie’s flair and instincts or Rebecca’s maturity, but I know why I am here, why I am still trying to do more than just preach and preside as a holy person doing holy things on holy furniture.

I am heir to that moment when Christ chose to call his disciples brothers and sisters, to take up the cross and set us free, to redeem human beings to be what God made us to be: a royal priesthood of sons and daughters, heirs, and stewards of the creation and each other.  I am heir to the God who comes and lifts us up, who loves us and commands us to love others, who kneels when we expect him to stand.

You are more than sacred furniture to God.  You are his daughter, his son, his beloved heir to the rule of love and grace.  Despite myself, I am still a pastor, and I will lift your hands until you hold them up yourself and make the world holy.

“The creation waits in eager longing for the revealing of the children of God.”  from Paul’s letter to the Romans