It was a perfect photo day in Whitby.  We drove over to see the monastery that held both Hilda and Bede, not to mention the great poet Caedmon.  It was founded originally in 657 by the Northumbrian king who appointed Hilda as abbess of the dual monastery, serving both men and women.  This was not uncommon in Celtic monasteries.

The monasteries founded in Scotland and Ireland between the late fifth and seventh centuries primarily came from Ireland, most by way of Columba’s monastery in Iona.  Aiden had already founded the community on Lindisfarne, which produced holy Cuthbert.  These holy islands belong to a massive missionary movement from Ireland.  From the islands the monks converted the locals to Christianity in a wave that would startle and possibly scandalize the church today.

By the time Hilda became abbess of the dual monastery at Whitby, she was expected to serve as more than a small religious community leader, she was expected and did become a force for local governance.  This expectation was surely helped by her heritage as grandniece of Edwin, king of Northumbria.  Her family certainly showed her noble heritage, but she was more than an heir of good breeding.  Bede describes her as an able administrator and teacher who seldom rested.  Her administrative skill was matched by an ability to spot and encourage others gifts, notably the aforementioned shepherd poet Caedmon.

Her baptism though in 627 had been by a Roman bishop-monk Paulinus who had come to England with Augustine and had baptized Edwin and the rest of his household.  Did that connection then effect the outcome of the Council of Whitby where the Roman system of calculating Easter and establishing Roman norms in Northumbria and later England?  There was already a strong influence through earlier Christian influences going back to Roman occupation, from which Patrick was converted and returned to Ireland two centuries before. 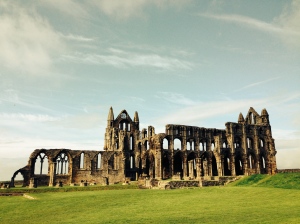 The ruins around us on Whitby’s hill are not from Hilda’s time.  There are very few artifacts from the later monastery, easy to understand when one considers the nature of early monastic settlements, more like rustic wooden towns than the later massive stone structures of later building periods that we more often associate with monasticism.  The Benedictine monastery of the eleventh and twelfth centuries that left the beautiful ruins was not of the same character as Hilda’s abbey.

The later settlement by Reinfried was Benedictine and based on the gift of the site by William de Percy and included the town and port.  The port and town remained small though the influence of the newly re-founded monastery reached across Christendom because of its relics.  In the eleventh century as the church began to rely on pilgrimage and the power and pull of relics to improve both religious and economic life, the abbey was susceptible to the same temptations as the church at large.  They charged heavy fees and build magnificent buildings, driving the monastic community into debt to feed the ego of a couple of more greedy abbots, according to the English Heritage headphones we were wearing.

We come then to the growing lesson of my first few weeks in England.  The holy sites of English tradition often show this double-founding, the first founding being based on a legitimate desire to create a holy community based in a life of discipline and right-living often based in a monastic ideal, but not always strictly based on Benedict’s Rule.  St. David’s, Caldey, Lindisfarne, Iona all began in slightly different ways, but with the same marks of discipline and holiness, based in character of life.  The examples extend outward through countless other communities, early Roman, Norman, Benedictine, Augustinian, Cistercian.  They are born out of mother communities in Rome, Ireland, Scandinavia, France.  The initial foundlings are based in a genuine motivation for evangelism, holiness, and missionary motivation.

The success of these communities varies widely in terms of influence, wealth, and even survivability.  The rule or character varied quite a bit as well depending on who founded them and what tradition they inherited.  But they did have incredible reach in terms of the Gospel.  It is an amazing time, especially when you look back through history.

On the other hand the eleventh and twelfth centuries are marked by new monastic settlements, too.  It is remarkable the reach that those monasteries and priories had.   But what becomes clear in a few places is the greed and power-lust that accompanied certain sites, especially those re-founded on sites previously considered holy.

The Western world could be said to relate to either time.  That is one of the tricks of writing about history.  Christianity is in decline, according to some numbers.  The world created by Christianity in the west is rapidly changing, either becoming decentralized away from its Christian center or decentralized globally becoming less central to how we view the world.  In both of those scenarios Christianity is diminished in terms of the West, either because it moving away from being a Western religion or because the West is just less religious.  In global terms, it is also true to say that just as Christendom moved from a Mediterranean center to a more northern one, so we could say that Christianity is moving east and south again and not diminishing much at all.  In that case, it just seems like it because we are no longer in the center where our faith is located.

Christianity was moving in both the fourth to sixth centuries and in the tenth to twelfth.  The question that ruins of Whitby asks of us is “What will we do here and now?”  We can claim this time as a time for holiness and evangelism to our own people and culture, or we can look back at the past and mine it for current profits.  It is remarkable to see how England and Wales have preserved the past and make a decent profit off our secular pilgrimage.

The ruins of Whitby mark a thousand years of profiting from pilgrimage.  There was a time when the monastic community could rely on the faith of the people to impel them to give almost any amount to be close to holy things.  That holy past also guaranteed a certain amount of political power that was drawn on for profit as well as to do good.  We certainly see both in our day.  In the United States we tend not to charge admission to our churches, but then we don’t have the relics to draw in the faithful.

But it isn’t that simple either.  We have movements within Christianity that look to the past for current holiness.  That is a similar impulse I think to the pilgrimage impulse.  Only it may be a three hundred dollar leather Bible that relies on its stilted language to convey a sense of holiness. (I am susceptible, though I can’t afford the best that Allan Bibles has to offer!)  It may be a claim back to the Westminster Covenant or the XXXIX Articles that gives us our authority, or it may be the bones of Hilda.  The pilgrimage impulse is the impulse to look to a holy past for current hope.

I am not opposed to the pilgrim, but rather to the profiteer of religion.  He uses God’s name in vain, and sublimating blasphemy through the saints is no better.  The religious profiteer turns God’s house into a den of thieves and needs exorcism in our day as well.  That is what Jesus was doing in the temple, a good old fashioned Galileean exorcism.

As a pastor I am leery of the lurking tendency to claim authority based in the past.  I have been told dozens of times in the last decade that we had to preserve history.  Now clearly, I love history.  But preserving history it not my job.  Neither is it my church musicians’ or my worship team’s or the Episcopal church’s.  It is tempting to preserve the past and sell it in decorative heritage jars.

But that temptation is satanic.  It takes us away from the true call of our day.  We are called to serve God in our day.  To be holy in our times of unholiness and rot.  To evangelize our culture.  To heal our sick.  To welcome our stranger.  And all for free.

Jesus was asked by the woman at the well whether it was right to worship God on this mountain (the holy site of her ancestors) or in Jerusalem (the holy site of Jesus’ ancestors).  Jesus replied, But the hour is coming, and is now here, when the true worshippers will worship the Father in spirit and truth, for the Father seeks such as these to worship him. (John 4, NRSV)

How do we worship God in spirit and truth?  The hour is coming and now is.  It is present time, our worship, and always must be.  We have to be really careful to tend to the holiness and love of neighbor of our day.  There is a shepherd composing poems right now in your church yard, and probably in Spanish.  Attend to his gifts, encourage his success, and celebrate his use of God’s grace in this time. 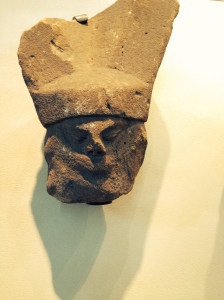 I don’t have Hilda’s heritage of nobility.  I don’t have the support of the Northumbrian king, but I have this day.  And my job is to lead my community to worship God in it, to be holy in this hour, to love and reach out to our neighbors, secular and heathen alike.

In Whitby I was struck that the church that sold its birthright to pilgrims, fleecing those who came rather than going out to those who were in need, was the one that left such beautiful ruins and so few saints. 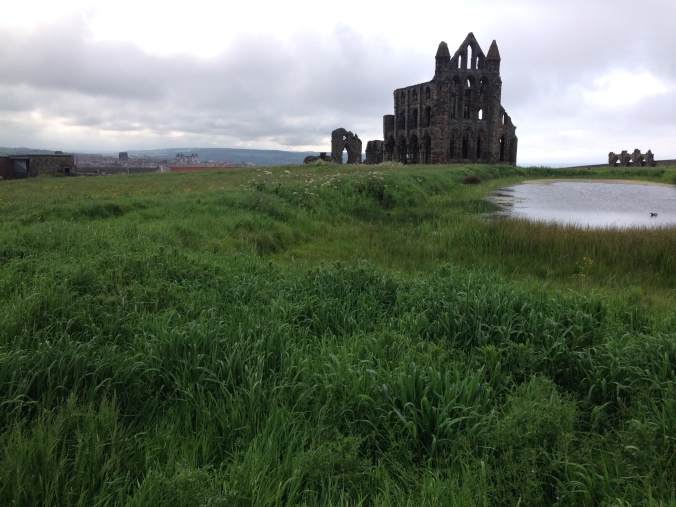